"The World is my Oyster"

... talk amongst yourselves
Posted by Rambling River at 7:04 AM No comments:

Truly Overheard ~ On the Street

Have you ever noticed how the British talk in questions?

Several weeks ago on my way back from a dental appointment I overheard a conversation.
I was on west 57th street near Columbus circle. A man pushing a baby carriage was walking with his wife, obviously tourist by the way they were looking up at the tall buildings.

Commenting with a heavy British accent ... 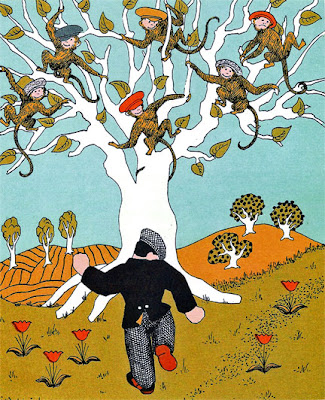 Now he felt quite angry.
He stamped his foot, and he said,
"You monkeys, you!
You better give me back my caps"

But the monkeys only stamped their feet
back at him and said, "Tsz, tsz, tsz."

Story and Pictures by
Esphyr Slobodkina
Scholastic 1940
Posted by Rambling River at 7:40 PM No comments:

We are all Blind ~ for Jimmy

The Blind Man and the Elephant

It was six men of Indostan
To learning much inclined,
Who went to see the Elephant~(Though all of them were blind),
That each by observation~Might satisfy his mind.
The First approached the Elephant,
And happening to fall
Against his broad and sturdy side, ~ At once began to bawl:
"God bless me! but the Elephant ~ Is very like a wall!"

The Second, feeling of the tusk,
Cried, "Ho! what have we here?
So very round and smooth and sharp? ~ To me 'tis mighty clear
This wonder of an Elephant ~ Is very like a spear!"

The Third approached the animal,
And happening to take
The squirming trunk within his hands, ~ Thus boldly up and spake:
"I see," quoth he, "the Elephant ~ Is very like a snake!"

The Fourth reached out an eager hand,
And felt about the knee.
"What most this wondrous beast is like ~ Is mighty plain," quoth he;
"'Tis clear enough the Elephant ~ Is very like a tree!"

The Fifth who chanced to touch the ear,
Said: "E'en the blindest man
Can tell what this resembles most; ~ Deny the fact who can,
This marvel of an Elephant ~ Is very like a fan!"

The Sixth no sooner had begun
About the beast to grope,
Than, seizing on the swinging tail ~ That fell within his scope,
"I see," quoth he, "the Elephant ~ Is very like a rope!

And so these men of Indostan
Disputed loud and long,
Each in his own opinion ~ Exceeding stiff and strong,
Though each was partly in the right ~ And all were in the wrong!

So oft in theologic wars,
The disputants, I ween,
Rail on in utter ignorance
Of what each other mean,
And prate about an Elephant
Not one of them has seen!

We forge the chains we wear in life.

Charles Dickens
Posted by Rambling River at 8:00 PM No comments:

How doth the little crocodile...

How doth the little crocodile
Improve his shining tail,
And pour the waters of the Nile
On every golden scale!

How cheerfully he seems to grin
How neatly spreads his claws,
And welcomes little fishes in,
With gently smiling jaws!

poem by Lewis Carroll
Posted by Rambling River at 9:03 PM No comments:

"What You Seek, You Already Are"

The Book of Secrets
Deepak Chopra
Posted by Rambling River at 7:59 AM No comments: 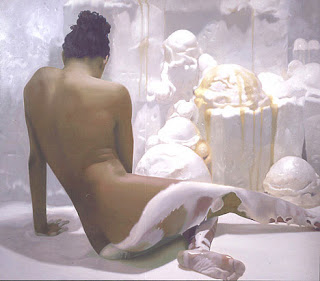 Ancient civilizations had saved ice for cold foods for thousands of years. Mesopotamia has the earliest icehouses in existence, 4,000 years ago, beside the Euphrates River, where the wealthy stored items to keep them cold.

The pharaos of Egypt had ice shipped to them. In the fifth century BC, ancient Greeks sold snow cones mixed with honey and fruit in the markets of Athens.

Persians, having mastered the storage of ice, ate ice cream well into summer. Roman emperor Nero (37–68) had ice brought from the mountains and combined with fruit toppings.

Painting by Will Cotton
Ice Cream Cavern
2003 ~ Oil on Linen
Posted by Rambling River at 7:09 PM No comments:

Rest is not idleness, and to lie sometimes on the grass on a summer day listening to the murmur of water, or watching the clouds float across the sky, is hardly a waste of time.

We hold these truths to be self-evident ...

that all men are created equal, that they are endowed by their Creator with certain unalienable Rights, that among these are Life, Liberty and the pursuit of Happiness.

Fireworks were made in China as early as the 11th century. The Chinese used their pyrotechnic mixtures for war rockets and explosives.
Posted by Rambling River at 4:16 PM No comments: 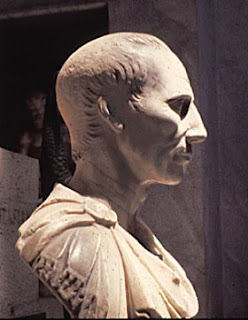 According to the Gregorian calendar, July is the seventh month. On the Roman calendar, it was the fifth month and it was called 'Quintilis', meaning 'fifth'. Julius Ceasar gave the month 31 days in 46 B.C. The Roman Senate named it 'Julius', in honor of Caesar.
Posted by Rambling River at 9:26 AM No comments: